What are Quarks and Gluons

What are Quarks and Gluons...

The quark is a fundamental particle that is inside protons and neutrons. There is a strange force that holds quarks together and this is known as the strong nuclear force, named the Gluon because it’s like a glue. What are these quarks and gluons that formed in a plasma of energy at the first second following the Big Bang? 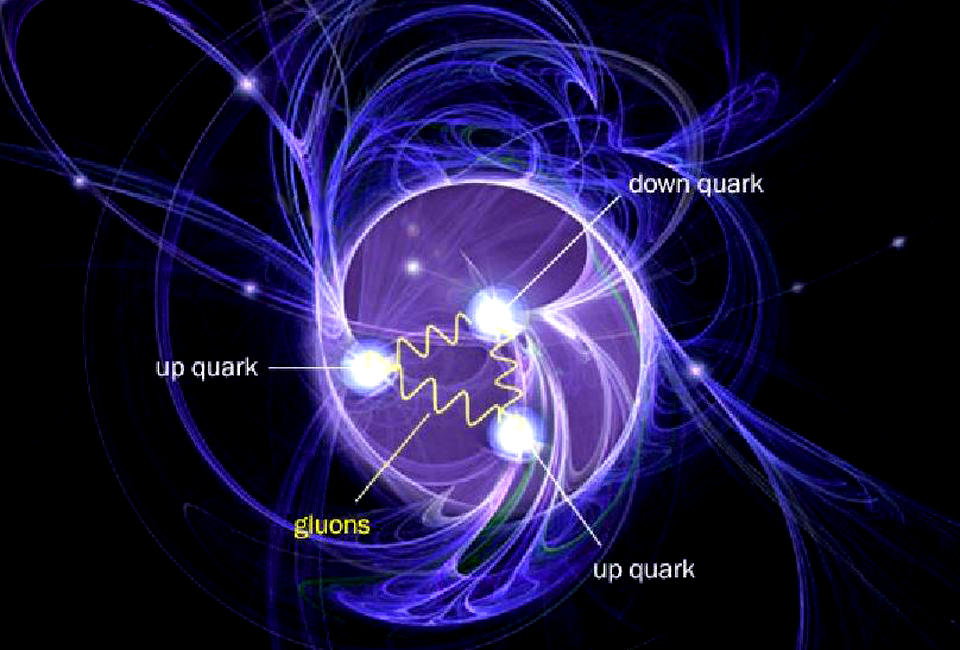 This image of quarks and gluons was without copyright information- Wikipedia is amazing.

Particles of protons and neutrons make up the nucleus of atoms and each one of these particles are made up of three quarks moving at breakneck speeds that are bound together by gluons, the particles that carry the strong nuclear force.

The energy of this interaction between quarks and gluons is what gives protons and neutrons their mass. Could this force also create gravity? Call me a quack for saying that, if you like…

What is a Quack?

I remember when I got my first full time job and I had to have a physical. There was a room full of us young boys waiting in our underwear waiting for the doctor to arrive. He walked past us carrying a black bag as I whispered to my group “quack, quack” and we all had a small laugh and some smiles to soften the embarrassment of being naked.

The takeaway is that nerds and scientists often hear remarks that they are crazy or weird because we say things before having proof or data to back up our statement.

I offer you my proof but I don’t use math which isn’t my thing, so I will show you the evidence that is staring at us. Let the mathematicians do their thing.

The Inflation Period of The Big Bang

It starts with a Big Bang and in less than a second the universe has inflated to the size that we would say is infinite. However, nothing is really infinite in the universe except the source of energy that created the Big Bang.

Time starts ticking when energy enters the 3rd dimension we call the visible universe. I see a lot of different data in the times and the temperature range during the first second of the bang.

Temperatures around 10-29 Kelvin degrees to 10-10 degrees K which is trillions to billions of degrees Centigrade after a few fractions of a second.

The point is that it was super hot, much hotter than our sun’s temperature.

During that first second many reactions happened. The first event was at time equals zero seconds when high frequency energy in the form of radiation started to enter the void of space to begin the process of creating a universe.

I want the reader to put aside their disbelief that other dimensions exist. Just imagine that something big is about to happen. The high frequency energy entering space turned into a plasma of matter containing photons, then electrons, followed by quarks and gluons.

At first there are antimatter particles as well but lets ignore them for now. I will talk about the Big Bang sequence of steps later.

The experiments at CERN using the Large Hadron Collider has found that the temperatures were too hot to form atoms and that there was really only one force present which they call the Grand Unified Theory or GUT, when the strong and weak nuclear force and the electromagnetic force are all just waiting to become individual forces.

And then the Electroweak - Era was when the electromagnetic force and the weak nuclear force were as one force. If they could also fit the force of gravity into this oneness it would be called the Theory of Everything or TOE.

These are some of the theories during the first second of the Big Bang. I’m not gonna go into the symmetry of energies and all kinds of weird stuff predicted by using math and extrapolating backwards to the big bang moment.

Occam’s razor is a rule that says simpler solutions are more likely to be correct than complex ones. Was it Einstein that said make things simpler but not too simple?

My intent is to show that after the radiation energy enters the universe during the first about 10-32 seconds the Big Bang was the size of a grain of sand. That seems impossible right?

But wait a minute, what if this was only an opening from another dimension like a portal? Then the rest of the energy flowed out from that  hole into the vast void of empty space.

Who is to say what kind of hole or portal and how big it was?

The big inflation period  was so fast it only lasted till 10-22 seconds to finish the energy packet delivery.

This energy was like pure high frequency light radiation that was homogeneous and moved faster than the speed of light to create the start of the universe.

Remember there was nothing in empty space to prevent the fast inflation of energy. When I study the Big Bang further I will talk about  the antimatter that was present with the matter.

The Higgs field arrived after 10-22 seconds to slow down the expansion and then matter started to form. First electrons and then quarks and gluons but no ducks going quack, quack…

It was a busy time as atoms formed followed by gravity. Where did the gravity suddenly come from? The universe is full of light photons, electrons and quarks. Some kind of energy arrived as gluons to glue quark together into atoms. This is the mystery force?

My simple theory is that as atoms formed gravity arrived. Gravity must exist at the atomic structure in atoms. This is the most plausible answer in my mind. Maybe more research into this idea will prove my theory to be correct?

What’s the takeaway today? Simpler is often better and if it looks like a duck and talks like a duck, then maybe it’s a quack.

Lovinthings.com visit my homepage for a free eBook. Any small comment is appreciated.

[…] The force of acceleration is like gravity and it affects quarks during the strong nuclear force of gluons.  […]

Excellent web site. A lot of useful information here. I’m sending it to several friends ans also sharing in delicious. And certainly, thanks for your sweat!