The Source of Quantum Gravity 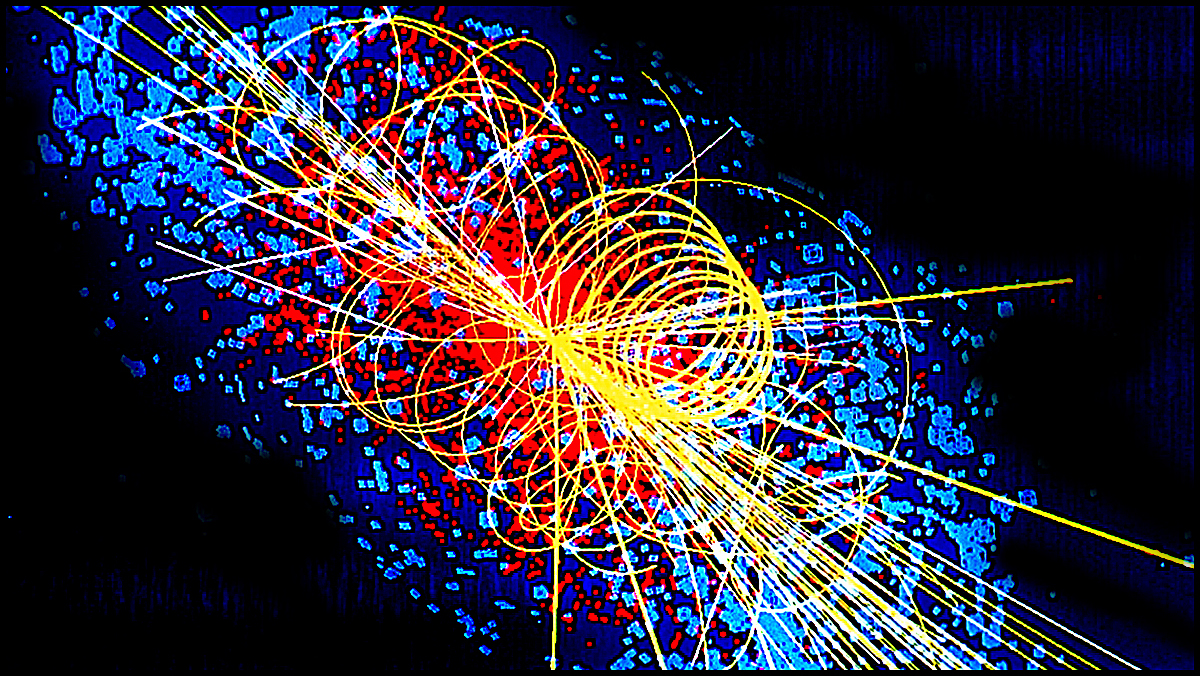 THE LHC at CERN produced this quark energy image.

Gluons, Quarks and the Big Bang

During the Big bang temperatures were too hot for quarks and gluons to exist. Matter was in a plasma state as a field of radiation with very little mass. This allowed energy to move at the speed of light into the universe.

Researchers at the LHC in CERN have created this plasma state of matter but they don’t know where gravity comes from.

Scientists have looked inside the atom and discovered a kind of glue called a Gluon.

An atom is made up of protons, neutrons and electrons. The electron is a fundamental particle with a negative charge and an orbiting energy field.

Protons and Neutrons are made of 3 quarks and 3 gluons. These particles combine in different ways to create atoms and molecules.

Quarks are held together by the strong nuclear force which is provided by Gluons.

Quarks have a force called a color charge that makes them engage in the strong nuclear force. This color force is a product of the quark/gluon interaction.

The color force is the same force that is called the strong nuclear force. But the color force is always moving inside quarks to maintain a neutral color charge. This force also acts as an attractive force to any matter that has quarks, so quarks attract quarks.

Gluons and Quarks don’t exist on their own. They are only found inside particles. Gluons hold 3 quarks together to make a proton or a neutron. And they also hold the nucleus together inside the atom. Eureka!

There is no doubt that gravity is a property of mass! The gluon particle is attached to quarks and quarks attract more quarks.

The mass of atoms and molecules is about 99% from the attractive binding force of the gluon energy. According to Einstein energy can be expressed as mass.

Gluons are the strong nuclear force that holds quarks together to make protons and neutrons. The Gluon force is kind of like a spring attached between two quarks. When protons attract electrons then stable atoms are created.

During molecular vibration this spring keeps a constant force binding the quarks together. There is also a color force that mediates the strong force associated with this interaction.

The force of the spring analogy explains how it seems to work. If you try to separate quarks from the gluons the spring becomes stronger and prevents them from pulling apart.

Adding enough energy to force them apart changes the extra energy into new quark pairs. So you created more matter from energy but it’s impossible to get free quarks.

Gluons and quarks are never free particles (except in the quark-gluon plasma during the big bang). Furthermore the gluon force (the strong nuclear force) has 3 ranges of strength.

The quark to quark bond is the first range for gluons at the quantum distance of quarks. At a slightly longer distance gluons hold the nucleus together that contains various protons and neutrons. Otherwise the protons would repel each other and fly out of the nucleus.

Consider a single hydrogen atom. It consists of one proton and one electron orbiting the positive proton. Where is the quantum gravity in a single atom?

This quantum force of attraction is too small to measure on the level of a single atom but gravity is an additive force. When the number of atoms increases in size to large gaseous clouds the combined gravity starts a nuclear fusion reaction.

Isn’t it amazing that gluons create and attract matter using the strong nuclear force. Then gravity (inside gluons) attracts enough matter to create a nuclear fusion reaction. This fusion reaction creates more types of matter as well as black holes.

Gravity a Property of Gluons

Gluons create quantum gravity by interacting with quarks. Therefore, matter must have quarks in order to have a force of gravity. All Baryonic matter have quarks.

All other fundamental particles lack gravity. Electrons, neutrinos and photons can have mass but not gravity. That means they are attracted to gravity but are not attracted to each other since they don’t have a gravity field.

This also means that a strong field of gravity (as in the sun) will not affect the structure or energy of electrons, neutrinos and photons.

Quantum particles, quantum mechanics and quantum gravity came into the Universe during the Big Bang. This intelligence in matter came from the Source that pushed energy into our Universe.

Consider that matter didn’t create this intelligence. We are part of this matter that has  intelligence to keep us alive. We would all be fools if we believe that the Big Bang came here by chance.

I am in awe of the creation that created the big bang and which continues to evolve around us.

The Theory of Everything (TOE)

The only thing left is to study the color force in more detail to find the law of quantum gravity. The force of gravity is inside the quark and gluon binding force. For instance, if the temperature of matter increases it has more mass.

When quarks get hot the vibrational energy increases inside atoms and molecules. To counter the increased vibrational force from breaking the quark- gluon bond the gluon force gets stronger. This increased force results in more mass.

The information in this article explains the way gravity works in the quantum world. The additive force of Gravity explains why it also works in the large scale of the Universe. Adding the quantum gravity theory to the Standard Model of Particles gets us to the Theory of Everything.

Thanks for being here and be well.

Hi there, I found your website via Google while looking for a related topic, your website came up, it looks good. I’ve bookmarked it in my google bookmarks.

Thanks for your comment. I didn’t know Google is showing my posts.
Please subscribe to my blog.

Thank you a lot for giving everyone an extraordinarily memorable opportunity to read critical reviews from this web site. It’s usually so ideal and packed with a lot of fun for me and my office co-workers to visit your website at the least thrice a week to study the fresh secrets you will have. And indeed, I’m also usually motivated with the fabulous principles you give. Selected 3 ideas on this page are easily the most beneficial we have had.

Hi to everyone there at the office! Thank you for following my blog I’m glad you enjoy it. Say, what kind of office work do you do there? My contact is
elovin@studioeurope.ca