Proof That Light Has Mass

Proof That Light Has Mass

Einstein said light has no mass. To explain why massless light is attracted to gravity, he invented General Relativity. Now a new theory explains that light has mass. 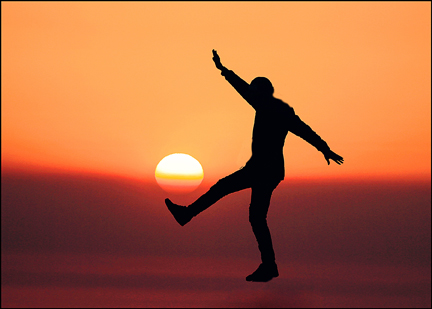 I want to know if light has mass because I can see and feel light, and it's attracted to the Sun like any other mass.

Einstein said light doesn't have rest mass (it's never at rest), but it has energy, and energy is equivalent to mass, E=mc2.

But then Einstein said that any particle with rest mass couldn't travel at the speed of light.

Light doesn't have rest mass, so it can travel at the speed of light. Right?

But does light have mass? Almost every scientist says it doesn't.

Isaac Newton's law of gravity allows light to be attracted to the Sun as if it has mass, but it's not enough to explain why light is deflected at an angle of 1.75" by the Sun.

To explain why light is attracted to the Sun, Einstein created a description of Space and Time around every large mass in space.

Einstein described the gravity of a large mass as a curvature in space that makes particles and light follow a curved path.

Einstein tried to point out that it's not an actual curvature but a mathematical description of particles moving on a curved path.

General relativity uses math to explain how the curvature can happen.

Since GR presents it mathematically, scientists accept the theory of curved space, even though Einstein was against the idea of Spacetime.

The Problem of Spacetime

Space is empty, so what causes space to distort?

Space doesn't have mass, so what causes the curvature of space? 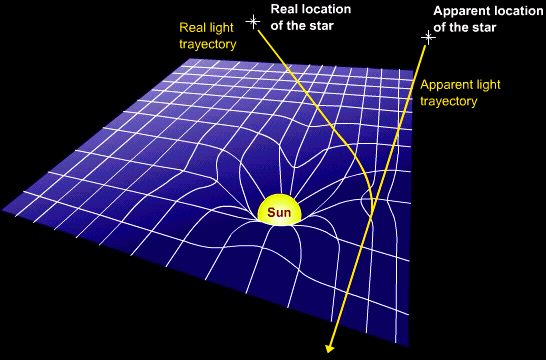 This drawing shows how the Sun's gravity curves the space to allow light to bend. Now, a new theory explains that light has mass and is attracted to the Sun without twisting space.

During the eclipse of the Sun in 1919, an experiment proved that starlight was deflected by the Sun, making Einstein and his theory of relativity instantly famous.

If we verify that light has mass, it helps to falsify the theory of Spacetime.

Scientists accepted the theory of Spacetime, and curved space, mainly because light is massless yet attracted to the Sun.

It doesn't make sense, so I have worked on the problem and found an alternative theory.

Einstein's mass-energy equivalence says light has a relativistic mass in the form of energy, which is equivalent to mass. E=mc2,

Some people say photons can't have mass or they will lump together, but photons aren’t attracted to other photons because they don't have gravitational energy.

Gravity comes from baryonic particles that have quarks.

Protons and neutrons are baryonic matter in atoms, but electrons, neutrinos, and photons are not.

In my book, Einstein: Distorted By Gravity, I explain that baryons have energy, and 90% percent of the mass in particles comes from the energy of quarks and gluons.

Unfortunately, Einstein didn't have that knowledge.

General Relativity says light passing close to the Sun falls into a curvature of space around the Sun.

To explain how sunlight travels out of the Sun, they say that light uses energy to escape the Sun.

The energy used to escape the curvature changes the frequency of white light towards the red spectrum. This theory is called gravitational redshift.

Note that they didn't call it spacetime redshift or space curvature redshift. Einstein recognized it as a gravitational force.

The Contradictions of General Relativity

Einstein called the curvature of space equivalent to a force of gravity.

But in GR, he says the curvature of space has no force.

GR doesn't stick to one theory: curvature or gravity. They use both versions whenever they want.

On the one hand, it's the curvature of space around the Sun that attracts light, and on the other hand, it's the force of gravity that light must overcome to escape the Sun.

Incredibly, light can leave a star, travel billions of years, and still escape the curvature around the Sun?

Einstein's equations generate a theory of gravity out of space and gravitational time dilation, which he says explains spacetime curvature.

The Spacetime theory says, “Matter tells space how to curve; space tells matter how to move.”

Newton's laws of gravity state that the force of gravity causes the attraction of mass to mass.

Spacetime is described by an image of objects resting on a rubber sheet.

Time isn't a dimension with physical powers that can cause an action.

Time is a measurement of motion using clocks that tick at the rate of Earth’s rotation. Clocks don’t exist in space.

Time is what a clock shows.

A New Explanation of Light's Motion

We need a new reason to explain why light is attracted to the Sun's gravity.

Einstein's GR mathematics can show the correct deflection of 1.75" but not for the right reason.

When light enters a different medium such as glass, the standard theory is that light slows down. That's not entirely true.

Light comes from electrons and always travels at the speed of light.

Light has a dual particle/wave nature that interacts with energy.

When light photons enter glass, the wave function of photons alters its trajectory, and the frequency of light slows down, reducing its energy, but it still travels at light speed.

A photon hits an electron in the glass, giving more energy to the electron.

The electron immediately goes back to its original orbital energy and releases the photon with the same frequency (energy) and same direction.

That photon moves at the speed of light and in the same direction until it hits another electron, and the sequence repeats.

The delay between hitting and reemitting a photon is the reason why the speed of light slows down in glass or any other medium.

When the photon escapes from the glass, it continues with the same trajectory and speed before entering the glass.

It's the same energy but not the same photon.

The path is set by the index of refraction, which varies for each medium.

It also shows that light is a particle since it can change its frequency and keep the same speed and information as the original photon.

In the case of gravitational redshift, a force of gravity changes the frequency of light but not its speed.

The Motion of Light Near the Sun

When light passes close to the Sun, it's deflected by three different forces.

It is deflected partly because of the mass-energy equivalence principle.

A photon’s energy is equivalent to its mass, and the gravity of the Sun attracts the photon. But that's just the beginning.

The Sun has a gravitational field around it that is full of photons leaving the Sun.

These photons have a lower frequency and longer wavelength because the sunlight escaping the Sun has gravitational redshift.

The energy field near the Sun is at a super hot temperature, and it’s a different medium for the photons coming from cold space and passing close to the Sun. 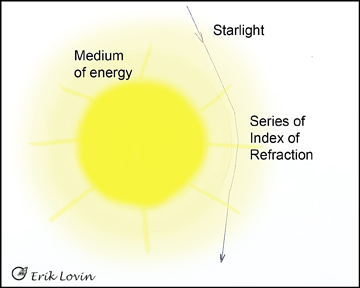 My crude drawing shows starlight bends around the Sun in a series of refraction depending on how far the light is from the Sun.

Photons enter the medium, and the index of refraction causes the photons to change frequency (energy) and direction as in glass.

As the photon gets warmer, the wavelength gets shorter, and it curves around the Sun's heat in the same way that light moves during a mirage.

The infrared heat acts like another index of refraction, causing the light to bend again.

When the photons escape the area of heat and gravity, their energy returns to the same frequency they had.

Gravitational lensing is another term to describe this effect. The description of light's motion behaves as if it has mass.

Neutrinos also have mass and travel at the speed of light.

The theories of science say you can't have electromagnetism without a particle that has mass.

A photon and neutrino have a magnetic field and an electric field that moves the particle aspect of their radiation.

This one characteristic of radiation means it must have mass.

Electrons create all photons, so I think the mass of all photons would be the same but with different frequencies from the different electrons.

Everything we see in the universe has mass.

Why would light be the only particle that has no mass?

Does this convince you that light has mass?

That being said, you can see and feel light, but you can’t see space.

News alert, recent experiments have shown that a photon has a tiny mass with a new upper limit of 7 × 10−17 eV.

Scientists don't want the photon to have mass because it complicates many equations and makes Einstein's idea of gravity false.

The truth is that photons have mass.

Yes, photons are the smallest particles and have the most negligible mass, but they aren’t massless.

The theory of Spacetime uses time dilation and abstract values that don't exist.

Since photons have mass, it explains why it's attracted to gravity, and Einstein's theory of gravity needs to be updated.

It's time to have a modern theory of gravity.

Thanks for reading another article that investigates current science using new logic.

Dear friends, I am getting close to finishing a new book that explains our relationship with time. I'm grateful for your interest here at https://lovinthings.com/

Take care, and be well, see you next Monday.