Is faster than light speed possible? Read this article to the end for a surprising answer.

The starship had a warp drive engine, and at "warp speed," they were moving faster than the speed of light. 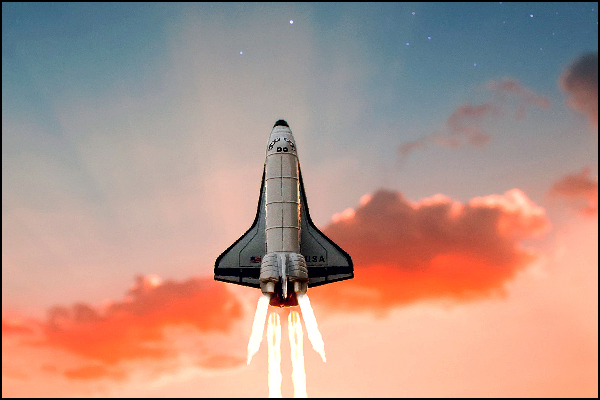 Scientists say nothing can move faster than the speed of light.

The Speed Limit of the Universe

The speed of light is also the speed of all electromagnetic radiation and the speed limit of fundamental particles such as neutrinos, quarks, and electrons.

Let's talk about the speed of motion.

Consider that the universe started at the Big bang event.

The energy entered into a container of space at the fastest speed possible. How fast can energy travel?

They are so confident knowing the accurate speed of light that one meter is defined by the distance that light travels in 1/299,792,458th of a second. But what is a second?

A second is accurately measured when a cesium-133 atom has completed 9,192,631,770 periods of radiation between the two hyperfine levels of the ground state of the cesium 133 atom.

The Error in The Speed Limit of Light

The measurement of a cesium-133 clock's ticking is counted inside Earth's gravity.

All clocks, including cesium atoms, are subject to the force of gravity, temperature, and pressure.

The definition of a second on Earth is calculated within the environment of Earth, and it includes the gravitational time dilation that exists on Earth.

The speed of light in space has no gravitational time dilation, but it's measured with Earth's time dilation seconds.

The GPS cesium clocks tick 45 microseconds faster per day in the environment of space.

Consider that the speed of light has never been measured in one direction of motion. It's always measured as a round trip to the moon and back, using the error of Earth seconds.

The Absolute Age of the Universe

Measurements of motion are made using a clock's time that ticks 86,400 seconds each day.

Every time we measure the speed of something, it's compared to the motion of Earth seconds.

Light moves in space, but we measure its speed with Earth seconds. The gravity on Earth slows down a clock's time because clocks are affected by gravity.

Light moves by the electromagnetic force, but we measure the speed with clocks that have an error in the value of one Earth second when measuring motion in space.

We also estimate the age of the universe using the invention of time.

Earth time is only accurate on Earth, and we estimate the universe's age to be13.8 billion Earth years. How much error is that estimate?

The universe's timeline started with the motion of energy that moved into the construction of stars, using the force of gravity.

The construction of our solar system started about 4.5 billion Earth years ago.

Time has nothing to do with the motion and construction of stars and planets.

We use the time on our invention of clocks to measure the speed of everything. The universe moves without time.

The motion from the Big bang is still moving into space, and it seems to be accelerating faster, but the speed limit of motion is the speed of light.

When two galaxies are moving away from each other, it can look like they are moving faster than the speed of light.

But it's only the relative speed between them that's fast. Each star or galaxy cannot move faster than light speed.

The Motion of Light in the Universe

We use the time on a clock to measure the speed of motion.

Time is used to measure motion, but time and clocks are not the motion; they are tools.

The distance light travels in one year is called a lightyear.

We look at the night sky and imagine how long the light has been traveling.

The Hubble telescope estimates that some stars are13 billion years old.

We make the mistake of thinking that we are looking into the past (time).

We are not seeing stars as they were a million years ago. We are seeing a source of light in our present moment.

When we look at the Sun, we see the sunlight that left the Sun about 8 minutes ago. We don’t see the Sun; let me explain.

The Sun and stars are massive objects in the process of nuclear fission.

They emit light that we can see, but we don’t see the nuclear reactions; we see the light coming into our eyes at this moment.

When you think in terms of time, it can be confusing. Instead, think about motion.

The motion of sunlight moves into our eyes in our present moment.

If a star stops shining, we won’t know until the light stops moving into our eyes. That means many of the stars we see might not exist.

We can see the starlight even if the star died a billion years ago.

If we see a supernova reaction of a star, we would see the dying moments of the star as it turns into a black hole.

The timelines and distances are so great that the last visible supernova occurred in the year 1604.

Enormous distances usually separate stars, and it takes millions or billions of years before we see the light arriving on Earth.

Why Faster Than Light Speed is Impossible

The key takeaway is that motion and energy move forward from the Big bang into the unknown, and we measure the speed of motion with clocks.

Space is a substance in a container that holds the universe's content. Space cannot be nothingness because space is part of the universe.

Look at it this way, the universe expands at the speed of light, and there's nowhere to move until the universe has expanded to receive the motion.

When you travel on a train or plane, you travel at the speed of your vehicle.

Since we are moving in the universe's movement, nothing can move faster into the future than our universe.

Travel At The Speed of Light To Make You Younger

When Einstein said that gravitational time dilation would slow time, many people believed traveling fast in space would make you younger than your friends and family.

Any light or motion that moves into space cannot exceed the speed of light.

Motion faster than light is impossible because the universe is in a bubble that expands at light speed.

In the present moment, we are moving into the future that expands at the speed of light.

Moving in a spaceship or riding on a beam of light keeps you in the present moment. The future never arrives.

You just took a fast ride into space and came back to the present.

Einstein's Twin paradox is explained by the finite speed of light and the fact that gravitational time dilation changes a clock's time, but it doesn't change the motion limit of the universe.

It makes sense that the universe expands at light speed.

You probably wonder what will happen to the universe if it keeps expanding at the speed of light. I have an answer published in my book, Einstein: Distorted By Gravity (A New Theory of Gravity).

Thank you for your time here at https://lovinthings.com/

Take care, and be well, see you next Monday.