Einstein’s general relativity (GR) is a geometric theory about gravity and the current description of how gravity acts in modern physics. My theory calls Spacetime false.

GR is a geometric description of Spacetime and how objects move in the space of the universe.

Einstein’s field equations show how mass creates a curvature of space and this curvature shows where and how objects will move in that space-time.

Einstein says gravity isn’t a force, yet he has no idea what is the “force” that makes his theories work.

The reality is that scientists still don’t know what causes gravity. 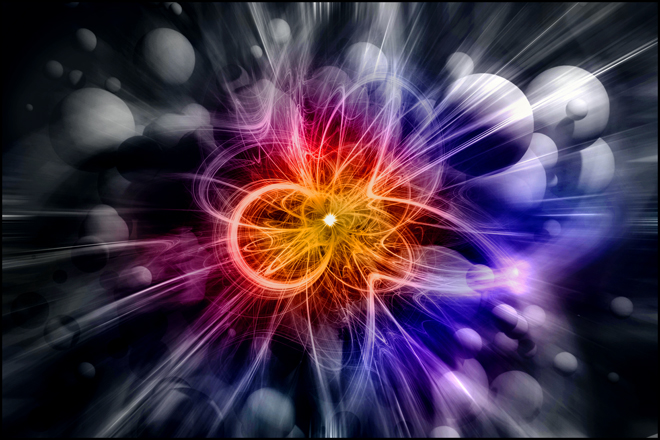 The quark-gluon force as shown in this artist's interpretation from the LHC in CERN.

Scientists have looked inside the atom and discovered a kind of glue called a Gluon.

An atom is made up of protons, neutrons, and electrons which are a fundamental particle with a negative charge and an orbiting energy field.

Protons and Neutrons are made of 3 quarks and 3 gluons and these particles combine in different ways to create atoms and molecules.

And protons contain one positive charge that cancels out the electron’s negative charge.

The proton has 2 up quarks and one down quark that equals a positive charge of one.

The neutrons have 2 down quarks and one up quark. While quarks come in 6 flavors, only the up quark and down quark are common. 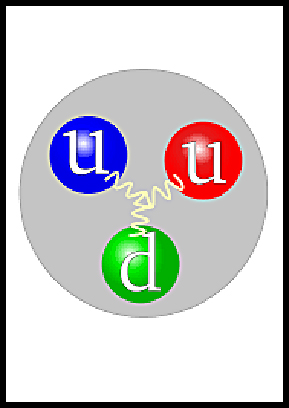 The proton with 3-quarks and 3-gluons contains a positive charge of one.

Quarks are held together by the strong nuclear force which is provided by Gluons.

The quarks use a force called a color charge that makes them engage in the strong nuclear force.

This color force is controlled by a quark/gluon interaction called quantum chromodynamics QCD.

The color force is the same force that’s called the strong nuclear force. But this force is always moving inside quarks to maintain a neutral color charge.

This force also acts as an attractive force to any matter that has quarks, so quarks attract quarks.

Gluons and Quarks don’t exist on their own, they are only found inside particles.

Gluons hold 3 quarks together to make a proton or a neutron, and they also hold the nucleus together inside the atom. Eureka!

There is no doubt that gravity is a property of mass! The gluon particle holds quarks together  and quarks attract more quarks.

The mass of atoms and molecules is about 99% of the attractive binding force of the gluon energy.

According to Einstein energy and mass are equivalent and can be expressed as mass E=mc2.

What is Gravity Made from

Gluons are the strong nuclear force that holds quarks together to make protons and neutrons.

When protons attract electrons stable atoms are created. The Gluon force is kind of like a spring attached between two quarks.

During molecular vibration this spring keeps a constant force binding the quarks together.

There is also a color force that mediates the strong force associated with this interaction.

The force of the spring analogy explains how it seems to work.

If you try to separate quarks from the gluons the spring becomes stronger and prevents them from pulling apart.

So you created more matter from energy but it’s impossible to get free quarks.

Gluons and quarks are never free particles (except in the quark-gluon plasma QGP during the big bang).

Furthermore, the gluon force (the strong nuclear force) has 3 ranges of strength.

The quark to quark bond is the first range for gluons at the quantum distance of quarks.

At a slightly longer distance, gluons hold the nucleus together that contains various protons and neutrons.

Otherwise, the protons would repel each other and fly out of the nucleus.

Is the 3rd range quantum gravity as the source of gravity?

I think there is a 3rd distance that extends beyond the nucleus.

Beyond the nucleus range, there is an attraction to other atoms that have quarks.

This attraction to nearby quarks explains why the force of gravity depends on the mass of the object.

This quantum force of attraction is too small to measure on the level of single atoms but gravity is an additive force.

When the number of atoms gets to the size of large gaseous clouds the combined force of gravity starts a nuclear fusion reaction and a star is born.

Then gravity (inside gluons) attracts enough matter to create a nuclear fusion reaction.

This fusion reaction creates more types of matter during a star’s supernova reaction.

Gravity a Property of Gluons

Gluons create quantum gravity by interacting with quarks. Therefore, matter must have quarks in order to have a force of gravity. All Baryonic matter have quarks.

All other fundamental particles lack gravity, electrons, neutrinos, and photons can have mass but not gravity.

That means they are attracted to gravity but are not attracted to each other since they don’t have a field of gravity.

Quantum particles, quantum mechanics and quantum gravity came into the Universe during the Big Bang event.

The intelligence in matter came from the Source that pushed energy into our Universe.

We are part of this matter that has the intelligence to keep us alive.

We would all be fools if we believe that the Big Bang created the universe by chance.

I am in awe of the creation that created the big bang and which continues to evolve around us.

That’s correct, creation starts a birth and then evolution works its magic. 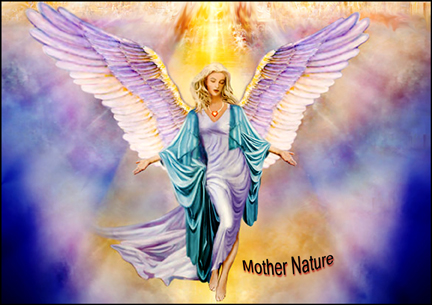 Spacetime in our Universe

If time is a measure of motion and gravity comes from the color force of quantum reactions the theory of spacetime is built on falsehoods.

However, Einstein didn’t know about quarks/gluons and the strong nuclear force. If he did, he wouldn’t have come up with a theory that mass distorts space.

I believe he would have said that gravity is a force of attraction between quarks.

Einstein would have said that time dilation and mass in general relativity is the result of the quark/gluon reaction.

He would have said that motion is invariant and that clocks are showing time dilation due to quantum gravity.

He might have said that light must have a small mass because it bends toward a strong field of gravity.

The simple truth is that time is not a force or a dimension and space cannot be stretched or distorted.

The arrow of motion moves only one way. You can’t reverse the frequency of matter in order to reverse time.

Quantum gravity changes the frequency of atoms in a clock and changes the clock’s time not the motion of energy itself.

The new paradigm is here. Motion is constant and only moves forward.

Spacetime and time travel are relegated to science fiction.

This new paradigm shows where the force of gravity comes from and explains why GR works the way it does.

Finally the quantum force that acts within matter to cause time dilation is explained.

The takeaway is that the mathematical results will be the same or more accurate but the mystery of gravity is revealed.

Share this knowledge with your friends and send me your comments to eriklovin@gmail.com

Thanks for being here https://lovinthings.com  and as always be well.