What is Your Timeline

What is Your Timeline 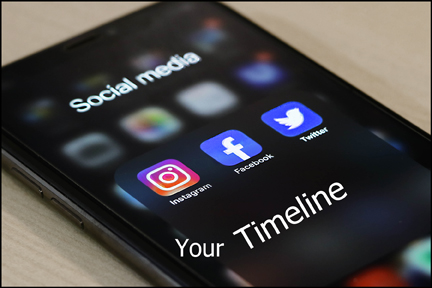 Your Timeline in social media is in this device.

Your timeline exists together as part of the universe’s timeline but they feel quite different.

Your time living here is a personal experience and you can feel that you are alive now and at the same time you feel separate from the life of the universe.

You have your own timeline. But, I want to examine more closely this feeling of time. What is this “time” that we share with planet Earth?

Time has been invented to measure the motion of our planet so we can keep track of our life. We needed a way to record our history and project our future.

Each day has been divided into 86,400 seconds and each year into 365 days. During the day we follow a timeline of working, eating and resting.

Every person is different and their timeline is different. You could say you have learned how to live with time by the experience of living.

But what do we really know about time? If you go to sleep at midnight and wake up at sunrise you might say that you slept for 8 hours.

You never say the Earth rotated one-third of a revolution on its axis.

But what’s more real, the 8 hours of time or the motion of our planet?

You see, time is a measurement of motion calculated by the rotation of our planet. Time is just a measurement using numbers and numbers aren’t real things.

The real power is in the motion of the universe and we live in this motion. We don’t realize that time is just a bunch of mathematical numbers.

Time itself is the motion that moves our planet. I think time must be realized as being not just what the clock shows but where that measure of time comes from.

We have learned to relate the clock’s time as something that’s real to us.

It’s real-time when it relates to the timeline of the universe and it’s not accurate time if it’s only a number the clock shows.

If you understand my reasoning then there is only one timeline in the universe and it moves constantly forward.

However, we feel like we have our own timeline and that we could travel to our past. But that’s what you do in your thoughts and dreams not in real life.

You can’t separate your own timeline from the universe timeline.

What that means is that you might have to accept the fact that you can’t time travel because you can’t leave the motion of the universe.

The 3 dimensions of time hold us here. The past is becoming now, the present is happening now and the future is starting now.

This is the timeline we live with so enjoy your gift of the present time.

What Does Time Really Mean

Time is the measurement of motion and time has been invented to measure the motion of our planet.

Time has 2 parts when an event happens and the duration of that event as compared to the motion of the Earth’s rotation. Usually, we also want to know where the event took place.

Our experience of living on our planet’s motion has made us think that time is something that we can feel as being personal.

We have memories of experiences and dreams of our past and future which have made us think we can time travel.

We have learned to measure time through our experience of living.

How long does it take to walk to school or to eat? How long until I finish my workday and go to sleep? When will I earn enough to buy a car or a house etc.?

Did you at any time think about the rotation of our planet? You measure your time as something that’s personal to you.

Every 24 hours the Earth rotates around its axis and the clock shows this as time.

I know it’s difficult to explain but when you wake up in the morning to see the sunrise you look at the time.

During our life, we don’t realize that our motion moves with the motion of our Mother Earth.

The Measure of Motion

The motion of the Earth around its axis takes 86,400 seconds as the scientifically accepted number. Thus one second is 1/86,400th of a mean solar day.

The second isn’t very accurately stated this way so a second of time on Earth has been calculated as the period of 9,192,631,770 oscillations of a Cesium-133 atom.

All measurements are related to the motion of Earth’s rotation.

Time travel is an illusion and our experience of time is a personal feeling. The energy of motion in the universe is real power and time is just a number.

A clock is only a tool that ticks at a certain speed just like a metronome ticks to keep music at the set speed.

Time dilation is when a clock moves faster or slower than a reference clock on Earth but the motion of Earth doesn’t change.

If you are following me so far you should start to realize that time dilation means nothing to the motion we are measuring.

Time dilation is only a change of the clock’s ticking when exposed to a strong force of gravity.

Einstein and Minkowski invented Spacetime as a geographical way to show time and space on a graph.

Spacetime is a mathematical construct that makes no difference to the timeline of the universe or the motion of our planet.

Therefore, time dilation is as meaningless as spacetime to the timeline of the universe.

Your timeline is the most important thing and how it relates to your life and happiness.

Thanks for reading, please share and check out,  https://lovinthings.com