The Ultimate Definition of Time

The Ultimate Definition of Time

Motion is measured with a clock. Therefore, time is the measurement of motion. Time and motion move together, and time is what a clock shows. 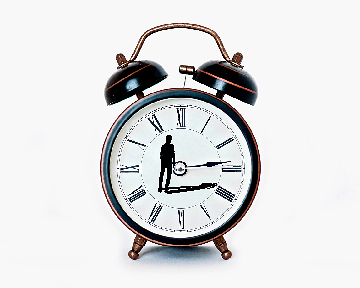 The planets orbit the Sun, our star. The motion of each planet is different, and we can measure how fast they move relative to our motion on Earth.

Where there is motion, there is time because time is how we measure motion.

When you drive your vehicle at 100 km/hr, the motor supplies the power, and you regulate it with your foot on the accelerator pedal.

The speedometer shows you how fast you are moving. You can travel 100 kilometers in one hour on planet Earth at that speed.

Time And Tide Wait For No One

Time is the measurement of motion, but the motion of things doesn't depend on time.

Time isn't something that waits or moves. The Earth moves, and tides move.

But not just any motion.

The universe is full of motion, and the motion of our planet is what we call time.

In the beginning, time was the length of one day. With the invention of clocks, the time of one day was made into 24 hours, each hour into 60 minutes, and each minute into 60 seconds.

At first, the hour was divided into 60 minutes, and after the second division of a minute, it was called a second. The second became the smallest unit of time, so a day has 86,400 seconds. Strange but true.

Science has measured the duration of one second by using the oscillations of a cesium-133 atom.

The second is defined as being equal to the time duration of 9,192,631,770 periods of the radiation corresponding to the transition between the two hyperfine levels of the fundamental unperturbed ground-state of the cesium-133 atom. That's a mouth full, eh?

The confusion we have is that a clock's ticking moves, and timekeeping moves, so we think that time moves; instead, it's the Earth that moves.

A clock is an invention that ticks at the same rate as the Earth moves, and the display on the clock is called time.

The Speed of Motion

If we don't differentiate between time and the time (display) on a clock, we will have errors in the mathematics of science.

Time in scientific events and durations must be accurate to give reliable results. What is the definition of a clock and time?

Time is an abstract thing that doesn’t exist outside of now.

Time is a measurement using a clock that works using numbers.

You don’t live in time or move in time. Time and time dilation are misunderstood concepts.

Time is a man-made motion measuring system based on the motion of earth using units of seconds.

Most people make the error of thinking that time is the same as motion. Let me explain.

Time is what a clock shows, and motion is the moving second hand on a clock. The second hand of a clock moves at the same rate as the Earth.

Time is what a clock shows when you look at the display.

The Motion of Atoms and Time

The unit of time is the second, and the measurement of its length is measured more and more accurately.

The way I see it, they measure a second with a better second.

Namely, that time is measured with time, or more accurately, motion is measured by counting motion and calling it time.

Time isn't real because it's defined by the motion of an atom. The motion is real, and time is the measurement of the motion.

Timekeeping tools became accurate with pendulum clocks, then quartz clocks, followed by the cesium clock, and now a quantum clock.

Every clock measures motion, not time, and then displays it as time. Time is what a clock shows.

Time doesn't go backward or stop. A clock keeps on ticking unless it runs out of power or gravity stops it.

Clocks use Motion to Measure the Length of a Second

They say that it will keep time to within one second over 100 million years. But some newer atomic clocks can do much better.

The quantum strontium clock, from the National Institute of Standards and Technology and the University of Colorado Boulder, measures the movement of strontium atoms.

All atoms have a consistent vibrational frequency (for strontium, it's about 430 trillion times per second).

The measurement of these movements is used to create the clock's "tick."

This clock is accurate to one second in 15 billion years.  Such a clock can measure a change in its elevation of as little as 2 cm due to gravitational time dilation.

You might wonder why a clock needs to be so accurate to motion?

There are two important facts about matter. Atoms vibrate or have a frequency, and time is relative to gravity. These two things are necessary for the proof of my theories.

The energy in atoms vibrates, and the measurement of that motion is what we call time.

Energy in the quantum vibrations of atoms (QCD) converts motion into quantum gravity.

Can Motion Move Faster than the Speed of Light?

The speed of light is the fastest in the universe. Is it possible for any motion to move faster than light?

Photons are the quanta of light, and they come out of electrons at the speed of light.

When scientists look inside atoms, they see an amazing movement of energy. The electrons must be moving at the speed of light since they release photons at light speed.

Normally, only photons can move at the speed of light, but quarks and gluons inside atoms are also moving at light speed.

When an object moves, you can calculate that the electrons are moving faster than the speed of light relative to a stationary object.

Another way to look at motion is to consider that electrons are moving at light speed.

In the same way, if two galaxies are moving away from each other, they are speeding away faster than the speed of light.

Thus motion can move faster than light in certain frames of reference.

Are you thinking about time now, lol? Thank you for following my blog and website at https://lovinthings.com/.

As always, be well, and stay safe.