This article isn't about fixing Einstein's errors but knowing why they need fixing. Your first step in understanding something isn't how something works but why it exists in the first place.

If you know its purpose, you can search for reasons and errors. 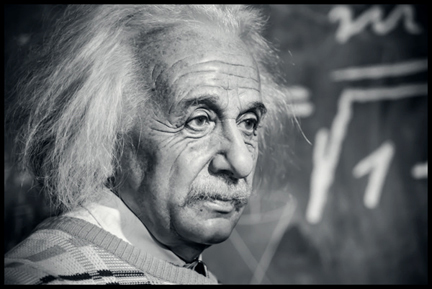 We are all familiar with the child who wants to know the answer to everything. When you answer, they keep asking you, but why, again, and again.

If you can't explain something to a 5-year-old, maybe you don't understand it?

I apologize to Einstein because it's always easier to criticize someone else.

How Does Einstein's Relativity Work

A man who needs a new tool, but hasn't yet acquired it, is already paying for it.

When you don't understand why things work the way they do, you can't see an error in how it works.

Einstein's Special Relativity says that an object cannot move at the speed of light.

It’s true; matter with rest mass can’t move at the speed of light.

When a thing travels at the speed of light, a thing gets smaller (length contraction), becomes infinitely massive, slows time down to a stop (time dilation), and needs infinite energy to move.

These things are impossible, right?

We can't compare light to other particles because of the relativistic nature of light.

Einstein said light is massless, and that's why it can travel at light speed.

But light has mass as relativistic energy, and light doesn't accelerate to light speed. It's created at light speed.

Einstein's math suggests that a moving object gains mass, gets smaller, and its time slows down.

What happens is that a force of energy must exist to accelerate an object.

The acceleration force is gravity, and the object's mass will increase as more energy is used.

The increasing mass will slow down the frequency of matter in quarks.

The slower frequency of quarks (Quantum Chromodynamics) slows down time only because time is a measurement of the frequency (oscillations) of the cesium-133 atom.

Most physicists don't know what length contraction is.

If anyone tells you that objects get shorter in a particular reference frame, they don't understand time dilation.

When they measure the length of things, they don't use rulers or tape measures in relativity; they use clocks.

Apparent length contraction happens at relativistic speeds when a clock's time slows down.

If an object moves from point A to point B faster, the distance doesn’t decrease.

The object is just moving faster between A and B.

But during relativistic speeds, the clock slows down and shows that much less time happens to move from A to B.

Length contraction of space is a result of a clock's time dilation, but physically the length doesn't shrink.

It's a false mathematical calculation because of gravitational time dilation.

The Error of Definition

Einstein made an error when he didn’t define time.

Working only with mathematics leads your imagination to believe that numbers are real things.

They are not, and they can lead to false answers.

The Error of Time on Earth

Einstein said time is relative. But he didn’t know that the time on Earth's clocks has an error of time dilation.

The truth is that time is relative to gravity. Time is what a clock shows.

Gravity affects all physical things, and the force of gravity on Earth adds time dilation to our clocks.

Gravitational time dilation has been proved on Earth and in the GPS clocks in space.

But scientists haven’t transferred the error into their equations.

The speed of light has an error because clocks move faster in space by at least 45 microseconds per day.

And we measure the speed of light with clocks that are 45 microseconds per day slower. What's the error during one light-year?

Spacetime is a geometric description of the force of gravity.

Light has energy and relativistic mass, so it bends towards a source of gravity just like any other mass.

To give accurate results in Einstein's field equations, you must consider the error of time.

The Error of Observation

You can't compare clocks that are millions of miles away from each other.

It's full of error and an impossible situation.

The Error of Gravity

Einstein said gravity is described by the geodesic paths that objects follow when approaching a large mass, such as the Sun.

But a description of gravity isn't gravity. He had no idea where the force of gravity comes from.

Now his description of gravity has become a theory of gravity.

Gravity is one of the fundamental forces in nature, and it comes directly from the mass.

The only thing inside matter that could create gravity is the quark-gluon interaction inside atoms that gives mass to fundamental particles.

My book, Einstein: Distorted By Gravity--A New Theory of Gravity, explains how quantum chromodynamics is the cause of gravity.

Black holes are too far away to be seen, so there's an observation error.

Several stories about black holes explain what you would see inside a black hole.

The infamous stopping of time by time dilation is what someone would see when looking at a spaceship entering a black hole.

All of these are stories that border on science fiction. I would like to leave science fiction out of science, even if they sell many magazines or books.

Einstein's mind experiment takes place when one twin goes into a spaceship and travels at almost the speed of light and, upon arriving back, sees that his twin is much older.

The idea behind this scenario is that a clock slows down during the force of acceleration (gravity).

Therefore, they assume that time slows down for the spaceship twin.

But a clock and the time on a clock are two different things.

Clocks are physical things affected by gravity, and so are we.

If gravity slows down a clock's ticking rate, a beating heart will also slow down. Before the clock's time stops, the twin's heart would stop.

A spaceship has too much mass to travel fast enough for time dilation to make any difference.

But, the effects of stress and gravity on the spaceship twin would make him older if he remains alive.

The Error of Observing Motion

When two spaceships are together, and one moves away from the other ship, they say that it's impossible to tell which one is moving relative to the other spaceship.

The math involved states that each spaceship sees the other one moving away.

That's true if you only rely on math or observation.

But the spaceship that feels the effects of acceleration from its engine is moving away from the other one.

If they go in opposite directions simultaneously, they can't tell by observation alone if the other ship is also moving.

The Error of Time Travel

I think Einstein said that time travel to the past is theoretically possible.

He claimed that the math equations might work backward in general relativity spacetime geometries such as cosmic strings and wormholes.

Math can work backward, but there is a direction of motion.

The entropy of a closed system such as the universe always increases in the forward direction of motion.

Using time dilation to time travel to the future is a widespread belief.

Stephen Hawking said time travel to the past is impossible but possible in the forward direction of time.

Einstein's Twin Paradox is the same idea. The mistake they make is thinking that time has physical powers. Time is a number on a clock.

The time dilation on a clock doesn't change anything. Time is a number on a clock, and we are always in the present moment.

If you travel at light speed and come back to Earth, you took a trip and returned to the present moment.

Stephen Hawking made many weird statements to sell more books.

He even hosted a party for time travelers as a joke, some people thought he was serious, but no one showed up.

I claim that time travel cannot exist because time isn't a physical thing, motion only moves forward, and the biological effects of gravity would be the death of an astronaut.

This thought experiment uses two perfect reflecting mirrors with a photon bouncing between them.  I claim that using a bouncing photon cannot show time dilation.

There are several errors in this mind experiment.

1. The speed of light is invariant, so it can't take longer to move between a fixed distance.

2. The mirror absorbs the photon, and an electron releases a new photon.

3. They assume that the mirrors are perfect reflectors.

4. Photons are invisible, but the experiment describes the path as visible.

5. A photon clock needs a counter which is a physical device, and the counter will experience gravity and show an error of time dilation.

6. The Lorentz transformation isn't valid since the photon is invariant and has no mass.

7. A Photon Clock and relativistic speeds of trains and spaceships don't exist.

If they replace the photon with a bouncing ball, then the Lorentz transformation would show that gravitational time dilation happens due to the longer path that the ball takes.

Time is what a clock shows relative to a force of gravity, temperature, pressure, and humidity.

If you don't understand why clocks show you the time, your time will cost you production and wisdom.

The error on a clock's display is called time dilation, and the reason why a clock's time changes is that gravity affects all physical things.

The law of entropy is like a law of motion. The motion we see and measure with clocks always moves forward.

The Earth can't reverse direction any more than light can travel backward. We can look back and learn why things work, but we can't move backward.

A good rule to follow is this, "Life can only be understood backward, but it must be lived forwards." — Søren Kierkegaard.

The takeaway, from this article, is to show how many errors exist in the explanation of things we don't fully understand. So please be lenient on my mistakes.

Thanks for your time here at https:/lovinthings.com/

As always, take care, and be safe.